Revolt of the Green World

Posted on November 6, 2012 by Mary Strong-Spaid 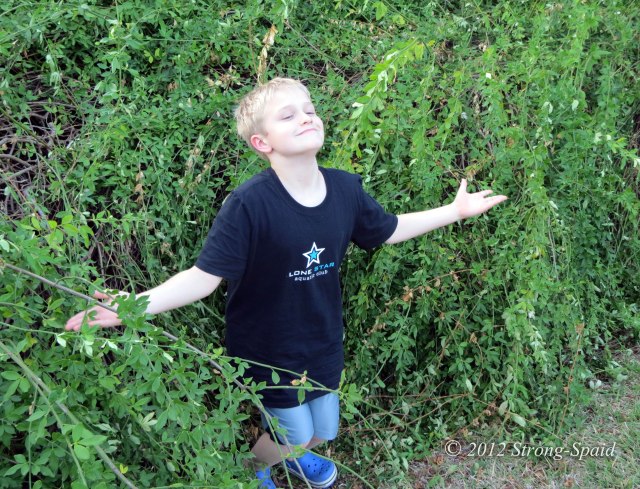 It was one of the most beautiful Texas days that he had ever seen, so the young king of trees and bushes decided to wander outside to enjoy his green world. However, as he was soaking in the sunshine and breathing in the warm afternoon air, he began to hear a dark sort of whispering going on around him.

A cold chill ran across his shoulders. At first, he couldn’t believe what he was hearing, because he didn’t think anyone or anything in his kingdom had reason to be unhappy. He hoped that the angry voices were nothing more than sounds created by a breeze moving through the leaves.

Unfortunately for the king, the horrible things that he was hearing were true. Because he had ignored his green world for so long, many of his plants had become ugly and unruly. At first, all they wanted was to be trimmed and pruned, but eventually they grew thick and totally out-of-control. Soon a large group of untrimmed, unpruned bushes were talking about overgrowing the king and covering his entire castle with dead leaves and thorny vines.  They wanted revenge and thought the time for change had come. “Revolt,” the leaves murmured as the bushes swayed back and forth in a dance of angry anticipation—“Revolt!” 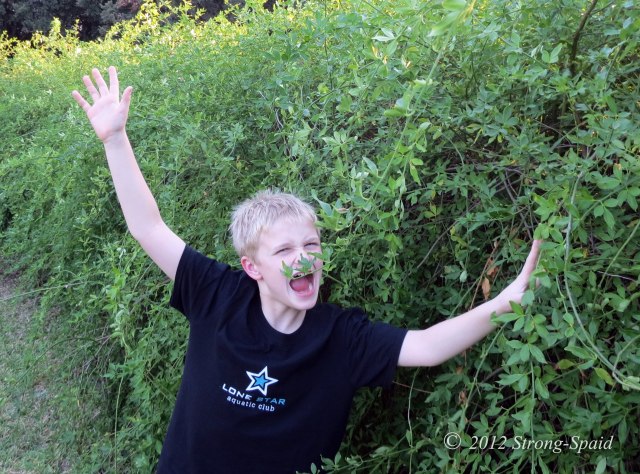 Suddenly, without warning, a long branch reached out and slapped the king right across the middle of his face. “Hey! What do you think you are doing?” The king shouted and sneezed as he pulled several annoying green leaves out of his nose.  “How could you treat your king like this? How dare you!”

“What? We think that it is you who have mistreated us,” hissed one of the long, thin branches. “We were so beautiful when we were planted in the castle garden several years ago. We thought we were lucky. But now we are unhappy, because you didn’t pay enough attention to us. In fact, you stayed inside your castle day after day and forgot all about us. We needed to be cut, trimmed, and pruned. Now, because no one ever bothered to cut us back, we have grown up to be an extremely unpleasant, irritable group of bushes. There are so many annoying bugs crawling around in the darkness beneath us, we are miserable. This is why we have decided that you must now pay the price! You shall soon experience annihilation by our green overgrowth.”

“But, it’s not my fault,” the king argued. “I did hire a landscaping company to come out and take care of you.”

“Well…no one ever came here, as you can easily see by looking at our overgrown, twisted, tangled condition,” the bushes snarled. “So, we blame you!” 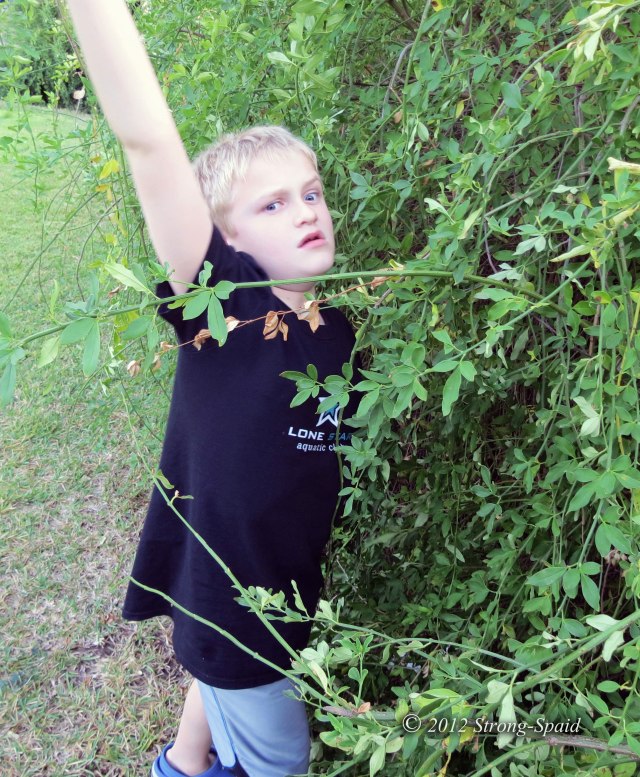 It was then that the king realized he was in great danger. He looked around hoping he could call someone over to help him, but there was no one in sight.  “Uh-Oh,” the king nervously said to himself.  “This is serious. It looks like the end of my kingdom is near!”

In the past, all of the dangerous situations that the king had encountered were just simulations on his computer games. But this was actually happening! There are no instructions for handling plant attacks, so what is someone supposed to do in a situation like this? He felt lost and confused.

To make matters worse, the king had left his silver sword underneath his bed where it was of absolutely no use to anyone. As the bushes began to slowly drag him forward into their inner darkness, he knew that he had to come up with a workable plan, and fast! 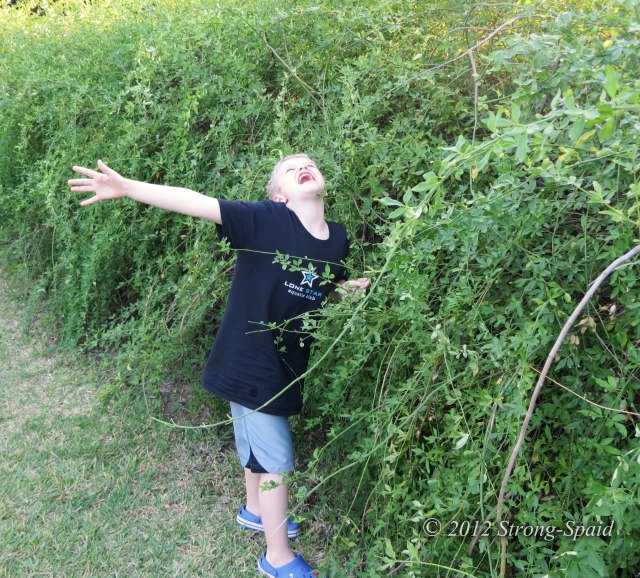 “No, No, No! There is no way that I can let this happen to me! I will not stand for this!” he shouted out in a loud voice, momentarily startling the bushes.

He used this opportunity to quickly pull the branches from his arms, but his plan for a quick escape did not work. Because the ground was uneven and wet, he lost his footing, slipped, and fell over backwards. He wasn’t standing for it anymore; he was about to lose the battle lying down. A thorny branch quickly jumped out and wrapped itself around the king’s right ankle, once again dragging him closer to his leafy doom. The bushes had no intention of letting the king get away.

Luckily, the king’s mother had always told him that he should never give up and never give in, so he struggled back up onto his feet once more. Unfortunately, as soon as the bushes saw that he was about to free himself and run away, they sent out even more branches to wrap themselves around him. 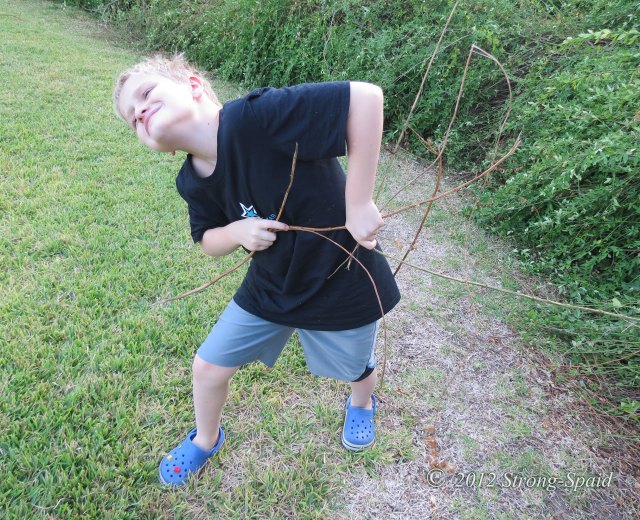 Even though the king was starting to get extremely tired by this point, and the branches were poking and pinching him without mercy, he was not about to lose this battle. He continued to twist and bend the stubborn branches until they started to break under pressure. Then the king softly said, “Please stop attacking me, so that we can talk calmly about your problems. I know that we can solve anything, if we just work together.”

“No!” shouted the bushes loudly. “We don’t believe a word you say. We want to fight! We want revenge!”

Using his most powerful voice, the king sternly replied, “Beware! If you do not retreat, I am going to pull off your leaves one by one. Don’t make me do this! Also, I know how to use this stick as a deadly sword, so I am warning you one last time—behave!” 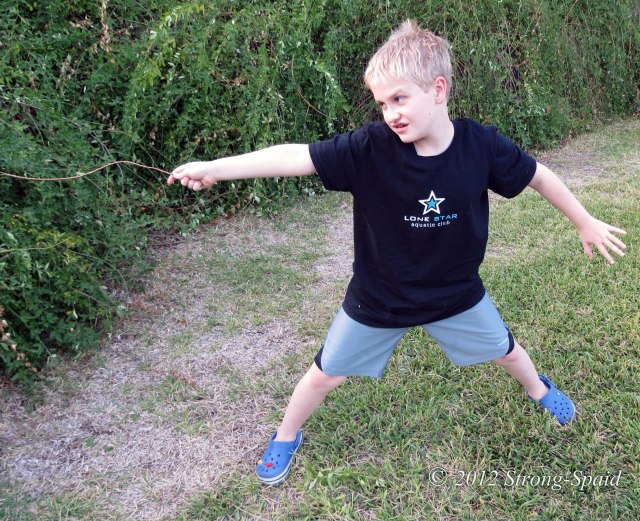 His brave words caused the wicked, killer bushes to get even more angry. So, the young king drew his stick sword and pointed it at them. “On guard! I’m not afraid to use this. Don’t push, pull, or fight with me anymore. I will cut you limb from limb. You’ll be sorry.” 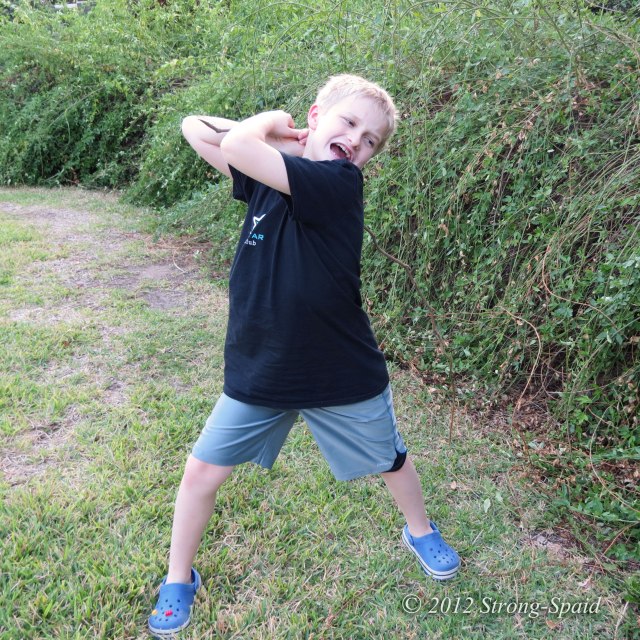 He raised both of his arms and was about to swing his sword stick forward, when the bushes cried out—“O.K. Wait a minute. Stop! Please stop! Maybe we have had enough. This doesn’t make sense. We don’t want to be all chopped up. What good would that do? That is not what we want. If you agree to trim us and give us all a nice shape, we promise that we will be forever grateful and never attack you again. ”

“Agreed!” The young king sighed as he put his stick down. He was relieved because he did not want to fight. He wanted his plant kingdom to be peaceful and serene, and he certainly didn’t want to suffer through any more surprise plant attacks.

Before he left his garden that day, he assured the bushes that he would fire the old landscaping company (that never showed up), and personally do all of the castle garden trimming and pruning by himself from now on. The bushes swayed and shook their long, leafy branches to show their approval. 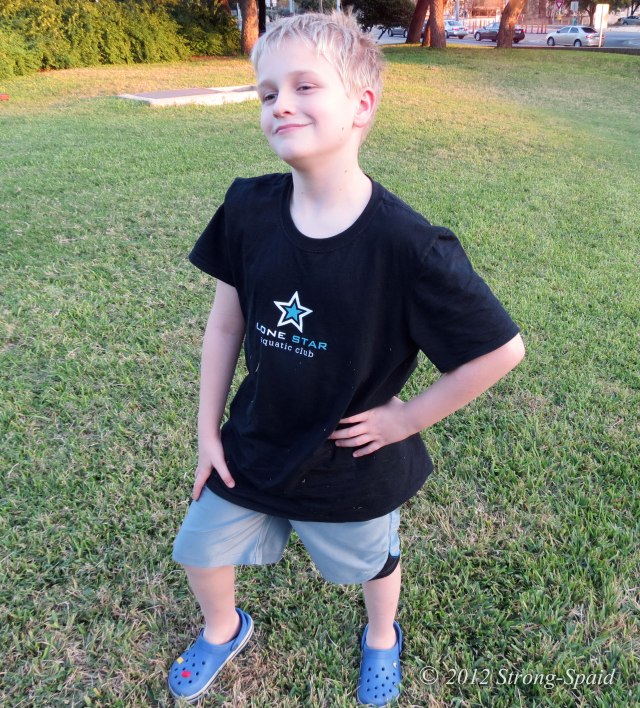 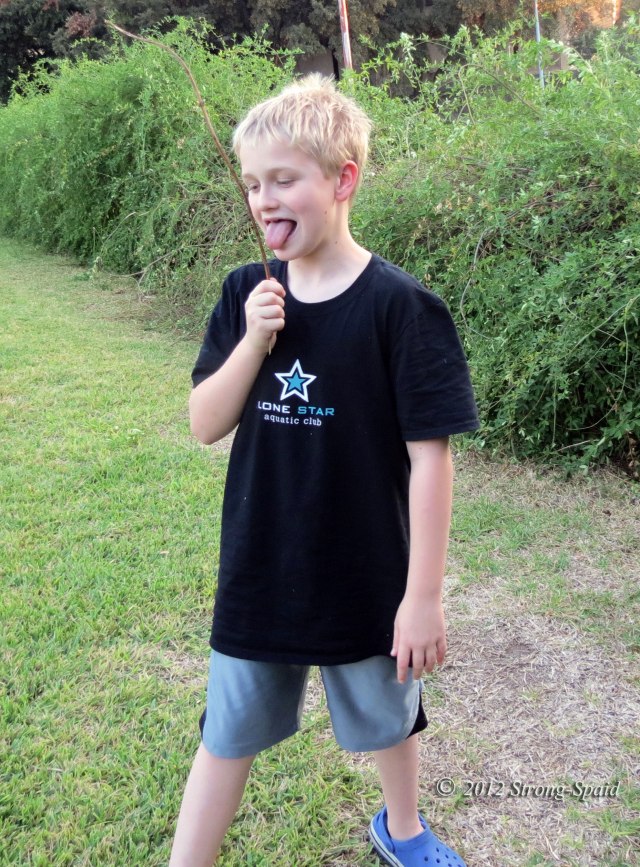 Never lick a stick!
It won’t do the trick
and it might make you sick.
You might even get a tick.
So—don’t be like Nick
and lick a stick.
And don’t listen to Rick,
sticks won’t give you healthcare.  ~~ by Josh

You can find me any time wandering around in my own mind gathering thoughts.
View all posts by Mary Strong-Spaid →
This entry was posted in Imagination, Nature, Photo Essay, photography, Writing and tagged Children's Books, creative writing. Bookmark the permalink.

27 Responses to Revolt of the Green World